FIRST PRIZE (8.000 €):
„Urbanatix“ by Dacapo Kultur Offensiv! | Bochum, Germany
Jury: “Their project is all about empowerment and about developing an educational programme from an event. “Each one teach one” as an opportunity to activate the inner heroes of a hidden young generation and let their superpowers show.”

SECOND PRIZE (5.000 €):
„Makeright“ by Central Saint Martins / University of the Arts London | United Kingdom
Jury: “They reframe risk as an opportunity, transforming criminals into entrepreneurs, not only for the time being but also in the long run: Creativity is being employed so as to break barriers and as a life skill.”

THRID PRIZE (4.000 €):
„Empower Parents“ by Hablar en Arte | Madrid, Spain
Jury: “Their efforts are directed to a social group in state of vulnerability, which is often invisible. Thus, it is a truly bottom-up initiative which starts from an urgency and addresses real needs.”

SPECIAL PRIZE for responsibility (3.000 €):
“Next Generation: Tales of Neto” by TUMO | Yerevan, Armenia
Jury: “Their task looks impossible: To approach a delicate political issue in a way that is not just educational, but entertaining for a young audience. They succeed by guiding young people to come up with their own solutions in this project.”

SPECIAL PRIZE for impact:
„Europe by People“ by Pakhuis de Zwijger | Amsterdam, The Netherlands
Jury: “Their project is impactful on many levels and able to address high politics as well as actual citizen issues. They can serve as an inspiration for other cities, using their creativity to make abstract concepts become tangible.” 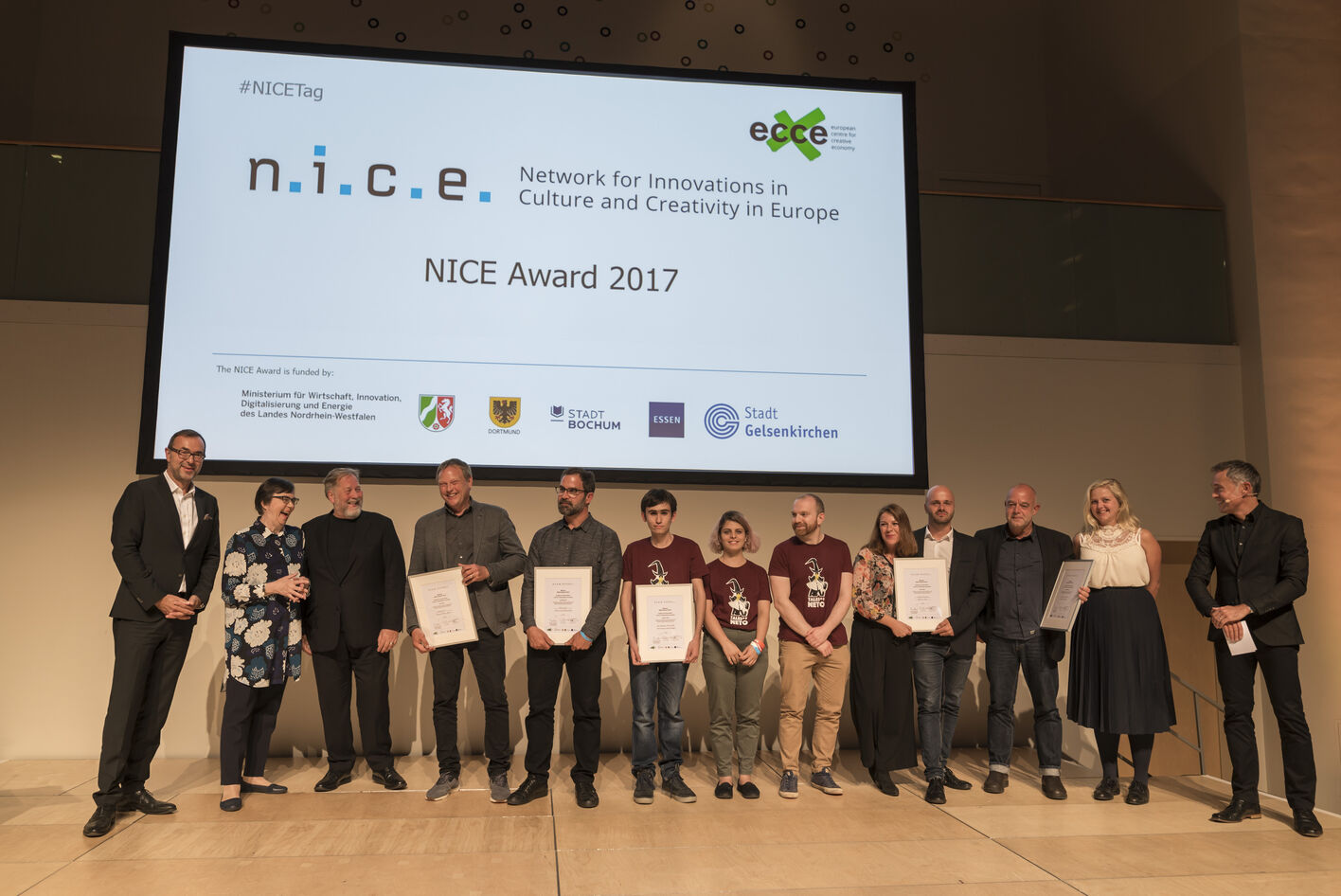 They are the winners of the NICE Award 2017:

Urbanatix, Makeright, Empower Parents, Europe by People and Next Generation 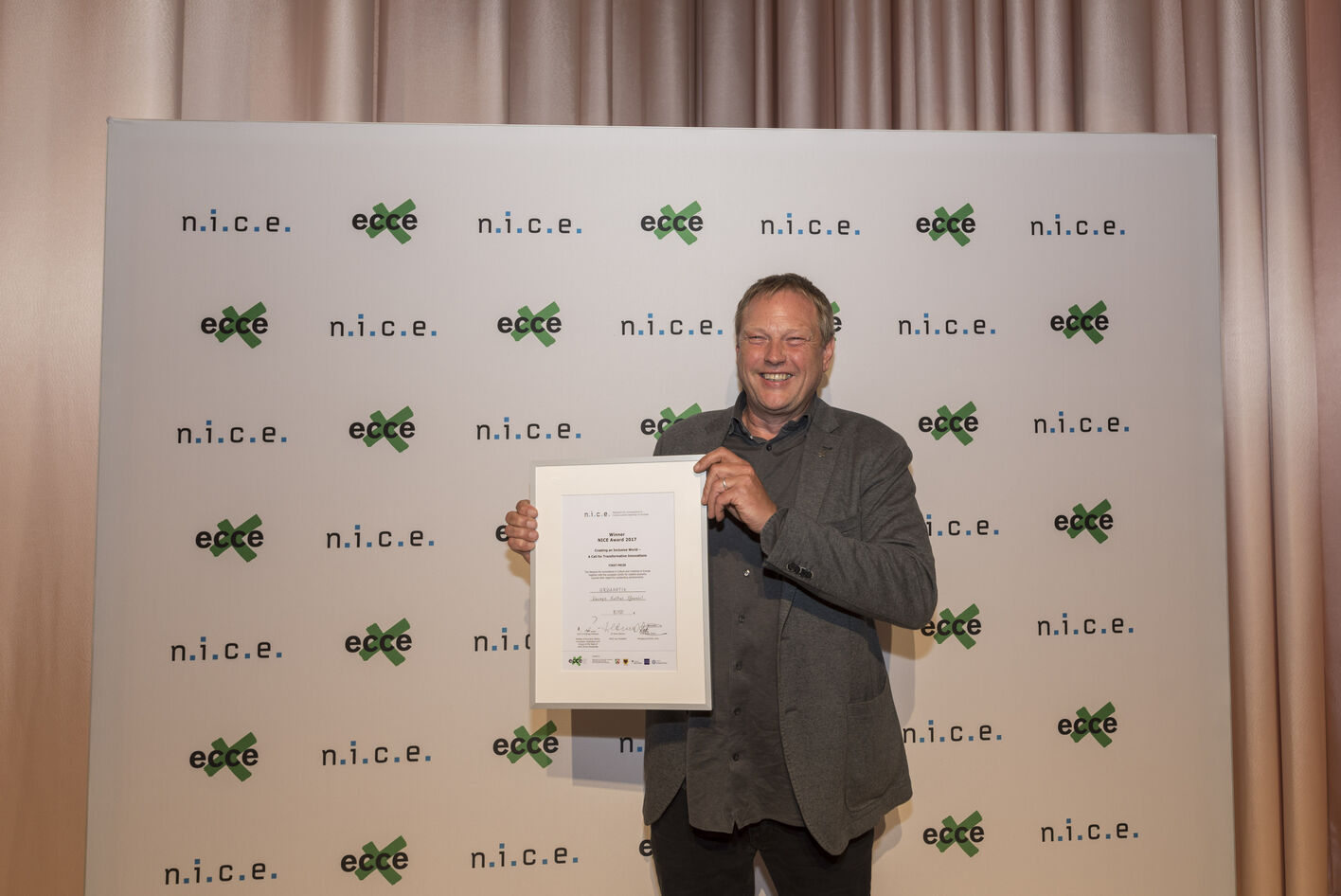 The first prize went to Urbanatix from Bochum. 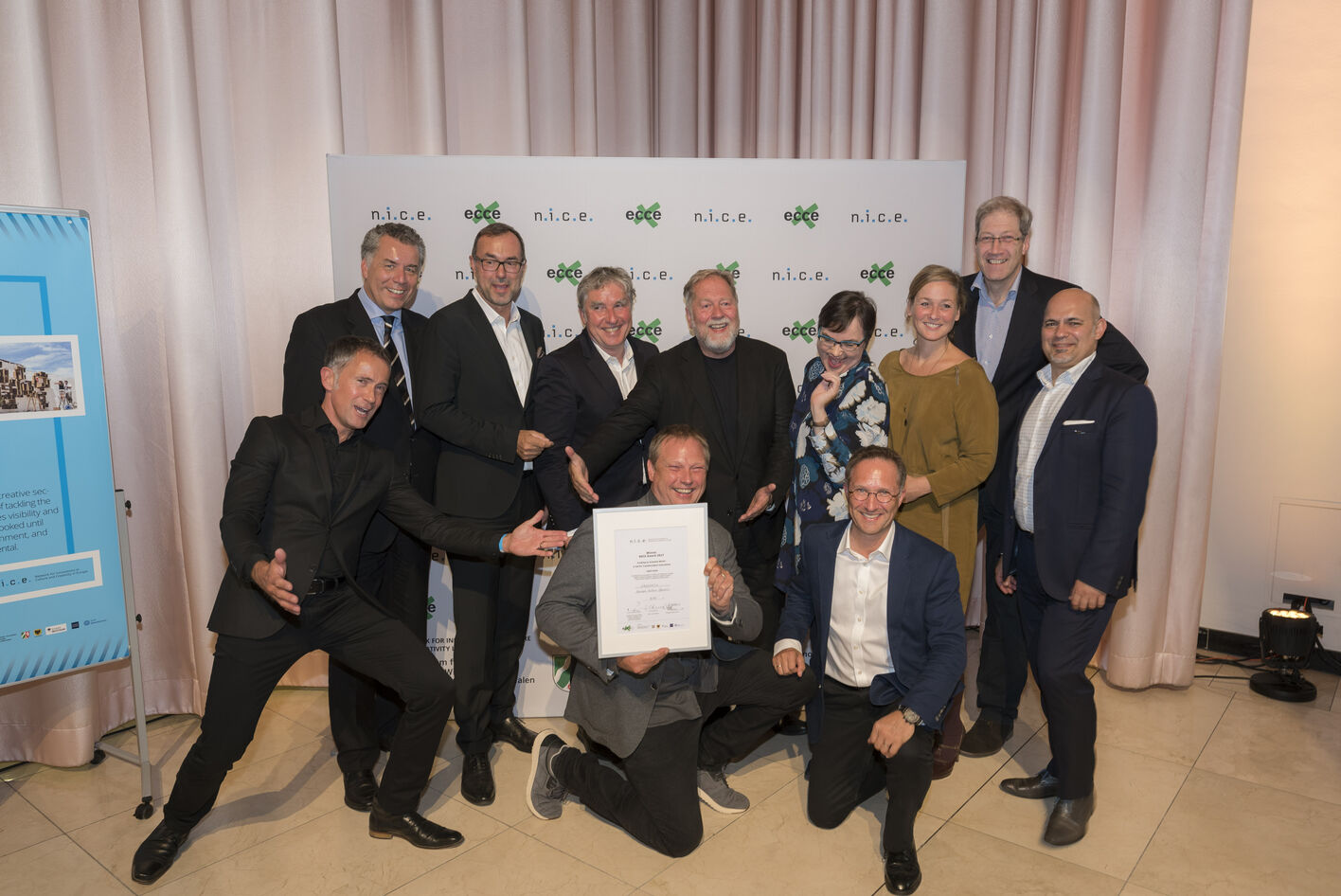 Together with 120 guests, the jury of the NICE Award 2017 celebrated this year's winner Urbanatix.

North Rhine-Westphalia consciously focuses on the creative economy as a motor for innovation. The NICE Award exemplifies the correlation of creativity and innovation in an exceptional way. The award winners in 2017 show with their projects, how new ways of thinking can help us cope with major societal challenges. North Rhine-Westphalia is the right place to present and refine these projects.

Karl-Uwe Bütof, Director General at the Ministry for Economic Affairs, Innovation, Digitisation and Energy of the State of NRW

„Creating an Inclusive World – A Call for Transformative Innovations” was the topic of the NICE Award 2017. We received 110 applications from 23 countries, nine of which were chosen for the shortlist by the jury chaired by Dr Anne Stenros. At the award ceremony on September 6th, 2017 this summary of the nominated projects was shown.

Empower parents | Madrid, Spain
Empower Parents is an educational community of families with children with ASD, professionals and cultural spaces. Through cooperative work among these agents, it seeks to make an impact in the community in order to raise social awareness regarding the reality of people with ASD.
NICE AwardShortlist 2017Winner 2017
Europe by people | Amsterdam, The Netherlands
The EU2016 arts & design programme ‘Europe by People, the Future of Everyday Living’ looked into contemporary social issues through arts and design, by providing solutions for everyday living and by being a canvas on which creatives and citizens painted a picture of Europe’s future.
NICE AwardShortlist 2017Winner 2017
Do we know each other? | Essen, Germany
’Do we know each other?’ is an interdisciplinary project that works with and for people with dementia to improve their quality of life. 13 students and their co-designers (caregivers, relatives and/or people with dementia) developed products and services in a very close participatory design process.
NICE AwardShortlist 2017
All 2017 NICE Nominees

4 neue Testamente (4 New Testaments)
4 New Testaments 4 artists with 4 different backgrounds and 4 different disabilities create and direct 4 different theatre productions. Each of them very different but all about the bible and each one with a total length of approximately 20 minutes.
NICE AwardApplicants 2017
A Avó Veio Trabalhar (Grandma Came to Work)
Grandma Came to Work is a creative hub that brings generations together by offering them a place where they can meet using a common language: creativity, immaterial culture and tradition.
NICE AwardApplicants 2017
A Tale of Two Cities
A Tale of Two Cities re-invigorated neglected public land, and fired the imaginations of people living in Liverpool and Manchester. Introducing expanses of wildflowers into visible sites was the driver for collective action, involving arts as the...
NICE AwardApplicants 2017
All 2017 - NICE applicants

Since 2013, the annual NICE Award has been promoting innovations through the cultural and creative sectors, and their integration into the wider economy and society, with the aim of tackling the major challenges of our future today. To this end, the NICE Award creates visibility and know-how transfer throughout Europe for innovations that have been overlooked until now. It kicks off debates and sparks ideas in industry, culture and government, and motivates cultural and creative makers to be innovative and more experimental.