Garrelt Duin, Minister for Economic Affairs, Energy and Industry of the State of North Rhine-Westphalia, presented the NICE Award in Essen to five international projects in the course of the Forum d'Avignon Ruhr. 213 applicants from 29 countries had submitted projects to that year’s topic "Solving the World’s Major Challenges – A Call for Innovations".

Jury Chairman Charles Landry: "The project is impressive due to its unique combination of art and science and employs technology beyond known limits."

Further prizes went to "PlanEt" from Great Britain and the Netherlands (5000 euros), which evaluates data of plants in cities and is thus a component of future "Smart Cities". "WikiHouse" from Great Britain (3000 euros) revolutionises house building and enables citizens to co-design the city. Two further prizes went to "HOME BACK HOME" from Spain and "Creative Technologies in the Classroom", from Sweden (2000 euros each). 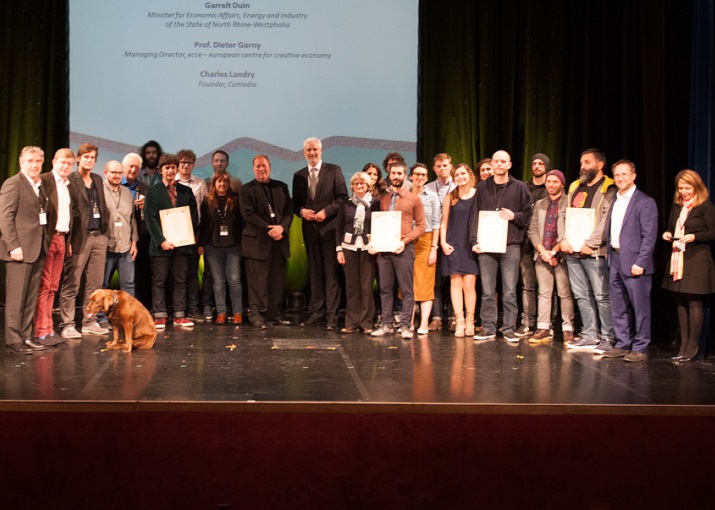 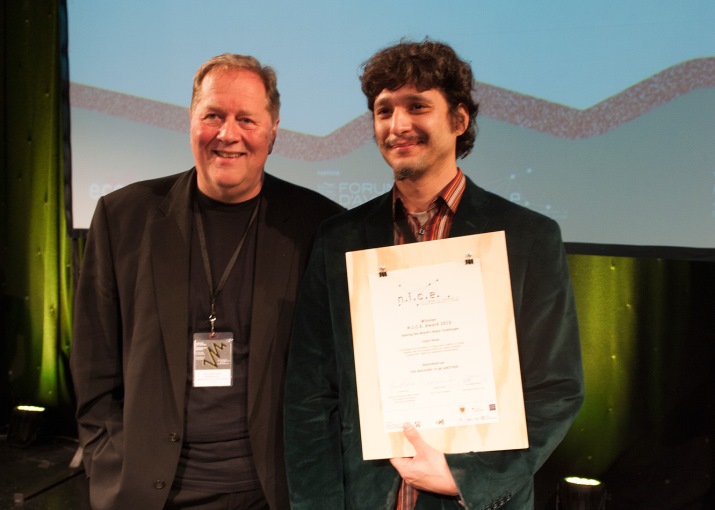 Prof Dieter Gorny with The Machine to be Another, first place

The NICE Award distinguishes the Ruhr area as a location for cultural innovation – entirely in the tradition of the European Capital of Culture RUHR.2010.

The NICE Award is about visibility. The potential and performance power of creative persons is all too often overlooked. The prize and its presentation within the very special setting of the Forum d'Avignon Ruhr make sure that a spotlight is switched on which illuminates the innovative strength of the sector.

Garrelt Duin, Minister for Economic Affairs, Energy and Industry of the State of North Rhine-Westphalia

1D touch | Saint-Étienne, France
The 1D touch project is a fair-trade streaming platform supporting independent creators and artists from around the world by offering an alternative for mainstream business models which mainly benefit the most renowned artists.
NICE AwardShortlist 2015
Climate for Culture | Brussels, Belgium
Climate for Culture has taken an innovative approach to assess the risks climate change poses to historical artefacts through the combination of high-resolution regional climate modelling together with building simulation tools.
Shortlist 2015Winner 2015
Creative Technologies in the Classroom/Barcelona | Malmö, Sweden
Creative Technologies in the Classroom (CTC) is a collaborative learning curriculum designed for schools wishing to incorporate emerging technologies into their existing classes by introducing basic concepts in programming, electronics and mechanics.
Shortlist 2015Winner 2015
All 2015 NICE Nominees

The application process for 2015 is closed, but for informational purposes the call is accessible below.

The NICE Award promotes innovations through culture and creative industries into the wider economy and society to tackle the major challenges of our future today. To this end, the NICE Award creates visibility and know-how transfer for so far overseen innovations throughout Europe, kicks off debates and impulses in business, culture and policy alike and motivates cultural and creative makers to be innovative and more experimental.

The first NICE Award served as a kick-off for NICE during the 2nd Forum d’Avignon Ruhr 2013 in Essen, Germany. It was held among participants of the conference, and it was the audience’s task to determine a winner. Four teams of ten were formed, throwing together people from different projects, backgrounds, age groups, and countries. They did not know each other, but they all had experiences in spillover projects. The teams were given different topics to consider – and five hours to roughly set up a spillover project related to Urban Development, Economy/New Work, Energy/Climate, or Intercultural Relations. In the end, each group had to present their project in a little performance. The Project "Shaking Hans" had won.

In 2014, when the network had grown and strengthened through several meetings and workshops, a new call for the Award 2014 was published.

The call looked with a wide scope for cultural and creative projects generating spillover effects. The prize was awarded for the most innovative spillover effect driven by a cultural and creative project, research projects or a political strategy/measure. 108 applications from 22 countries were submitted from Artists and cultural creative entrepreneurs, scientists, politics and towns. A jury constituted of Pia Areblad (TILLT, Sweden), Charles Landry (Comedia, UK), Prof. Kurt Mehnert (Folkwang University of the Arts, Germany) and Janjaap Ruijssenaars (Universe Architecture, The Netherlands) establishes a “best of” short list of ten projects.

The projects of the nominees of the NICE Award were presented in the NICE Exhibition designed in the City-Messehalle in Essen.

On 12 June 2014 Garrelt Duin, Minister of Economic Affairs, Energy and Industry of the State of North Rhine-Westphalia, announced the winner of the award at the Forum d'Avignon Ruhr in the GOP Variety Theatre. The winners were: RLF / Richtiges Leben im Falschen (Berlin), Conexiones Improbables (Bilbao), the Unperfekthaus (Essen) and Urbanauts (Vienna). The N.I.C.E. Award 2014 was funded with overall 10,000 Euro by the Ministry of Family, Children, Youth, Culture and Sports of the State of North Rhine-Westphalia and the Cities of Bochum, Dortmund, Essen and Gelsenkirchen.

The NICE Award is now an integral part of NICE, and it is the first of several tools and services with which NICE wants to foster innovation of culture and creativity as resources for economic growth and political development.

In 2015 the NICE Award continued to grow: on the topic "Save the world-major challenges" 213 projects from 29 countries were submitted.