"The Real Life in the Wrong One": Transmedia art project against capitalism wins NICE Award 2014

From 10 to 12 June, in the Creative.Quarter City Nord.Essen, about 200 cultural and creative artists, as well as representatives from politics, research and the economy from 21 countries met for the third time at the 3rd Forum d'Avignon Ruhr and the exhibition of the European Innovation Award for Culture, the NICE Award.

In total, 108 projects from 22 countries applied for the NICE Award 2014. The international jury headed by Charles Landry nominated 10 projects and invited them to the exhibition at City Messehalle in Essen, which was opened in parallel to the Forum d’Avignon Ruhr. Following one-on-one interviews with the nominees at the exhibition, the jury consisting of Charles Landry, Prof Kurt Mehnert, Pia Areblad and Janjaap Ruijssenaars announced the following four award winners.

The winner of 5,000 € is the project "RLF Richtiges Leben im Falschen/The Real Life in the Wrong One" of Projektbüro Friedrich von Borries in Berlin, a transmedia art project in cooperation with ARTE, Suhrkamp and UFA.

It is a playful yet serious critique of capitalism. The jury honoured the multi-media campaign as a cultural innovation. Based on an open digital community, RLF systematically dissolves the thin line between reality and fiction. "A unique combination of media and non-media channels transforms RLF into a multi-dimensional weapon of revolution: it's a novel, an actual company, a game, a film that enters the real world in the shape of specific events and interventions," describes Projektbüro Friedrich von Borries the project. To experience and understand his statement, you just have to play it: www.rlf-propaganda.com 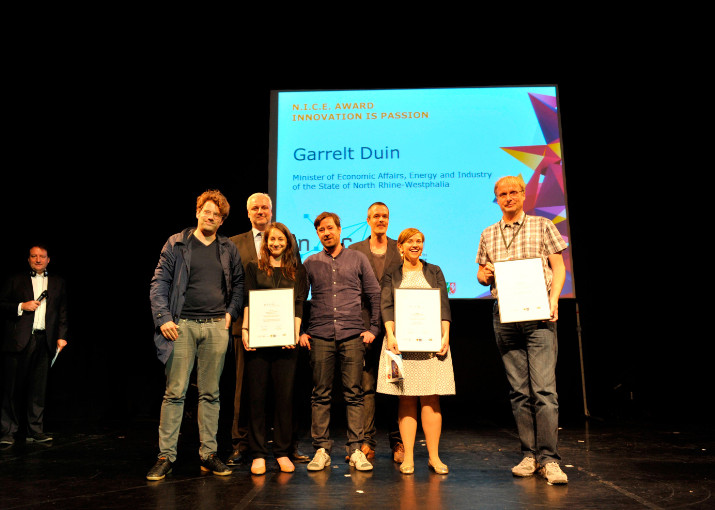 The winners with Garrelt Duin (third from the left), NRW-Minister of Economic Affairs 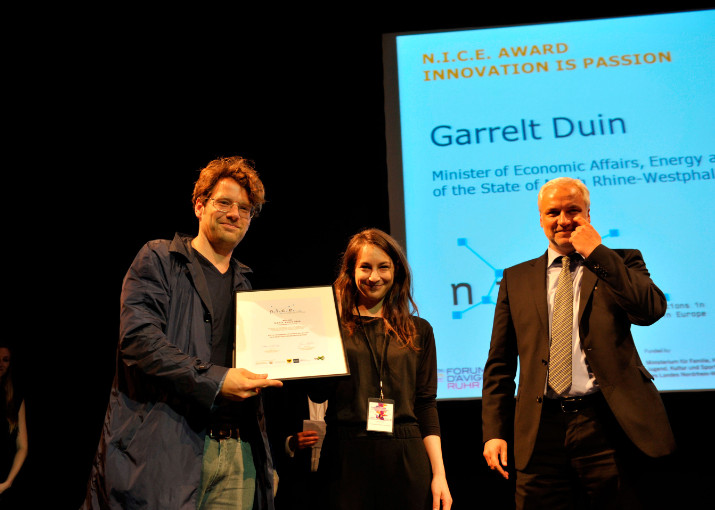 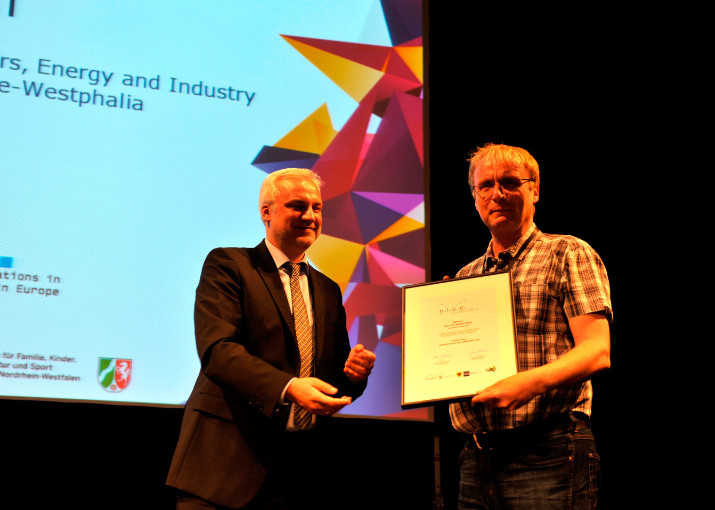 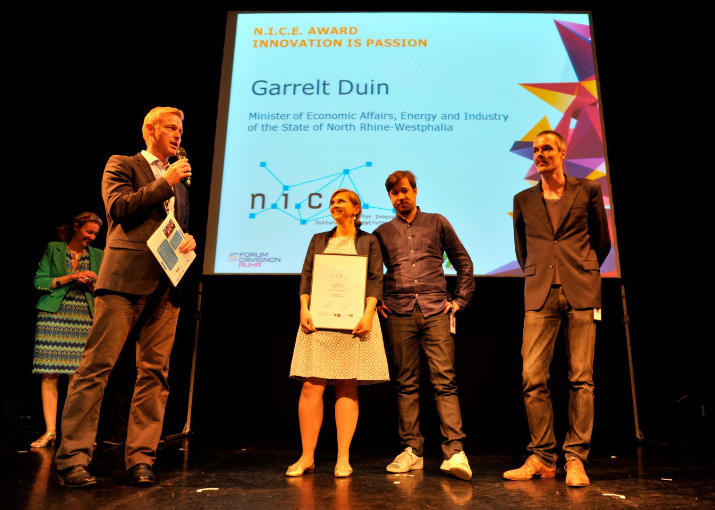 The second prize worth 2,000 € each went to Unperfekthaus in Essen and the Spanish project Conexiones Improbables from Bilbao.

Conexiones Improbables is a Network which brings artists and companies together, the Unperfekthaus affords artists of every kind a place where they can express their creativity freely. Another prize worth 1,000 € went to URBANAUTS Street Lofts from Vienna, which was also invited by Creative Business Cup Denmark to attend the Creative Entrepreneur Week in November 2014. The invitation was sponsored by Rasmus Tscherning, Managing Director of the Centre for Cultural and Experience Economy in Denmark. The NICE Award 2014 was presented by NRW Minister for Economic Affairs Garrelt Duin on 12 June at the end of the Forum d’Avignon Ruhr. The NICE Award is funded by the Ministry for Family, Children, Youth, Culture and Sport of the State of North Rhine-Westphalia and the Cities of Bochum, Dortmund, Essen and Gelsenkirchen.

[ID]factory | Dortmund, Germany
The [ID]factory conducts radical research in the area of non-linear, artistic thinking and action in extra-artistic areas and is a project of the Centre for Cultural Transfer at Technical University Dortmund's Department of Art and Material Culture.
Shortlist 2014Winner 2014
Beautiful Trouble | New York, USA / Berlin, Germany
Beautiful Trouble (BT) is a growing web toolbox and an international network of artist-activist trainers and finally a book whose mission is to make grassroots movements more creative and more effective.
Shortlist 2014Winner 2014
Conexiones improbables | Bilbao, Spain
Conexiones improbables' work is based on the observation that more and more artists are interested in applying their methodologies, thoughts and way of perceiving situations out of the artistic field.
Shortlist 2014Winner 2014
All 2014 NICE Nominees

The NICE Award promotes innovations through culture and creative industries into the wider economy and society to tackle the major challenges of our future today. To this end, the NICE Award creates visibility and know-how transfer for so far overseen innovations throughout Europe, kicks off debates and impulses in business, culture and policy alike and motivates cultural and creative makers to be innovative and more experimental.

The first NICE Award served as a kick-off for NICE during the 2nd Forum d’Avignon Ruhr 2013 in Essen, Germany. It was held among participants of the conference, and it was the audience’s task to determine a winner. Four teams of ten were formed, throwing together people from different projects, backgrounds, age groups, and countries. They did not know each other, but they all had experiences in spillover projects. The teams were given different topics to consider – and five hours to roughly set up a spillover project related to Urban Development, Economy/New Work, Energy/Climate, or Intercultural Relations. In the end, each group had to present their project in a little performance. The Project "Shaking Hans" had won.

In 2014, when the network had grown and strengthened through several meetings and workshops, a new call for the Award 2014 was published.

The call looked with a wide scope for cultural and creative projects generating spillover effects. The prize was awarded for the most innovative spillover effect driven by a cultural and creative project, research projects or a political strategy/measure. 108 applications from 22 countries were submitted from Artists and cultural creative entrepreneurs, scientists, politics and towns. A jury constituted of Pia Areblad (TILLT, Sweden), Charles Landry (Comedia, UK), Prof. Kurt Mehnert (Folkwang University of the Arts, Germany) and Janjaap Ruijssenaars (Universe Architecture, The Netherlands) establishes a “best of” short list of ten projects.

The projects of the nominees of the NICE Award were presented in the NICE Exhibition designed in the City-Messehalle in Essen.

On 12 June 2014 Garrelt Duin, Minister of Economic Affairs, Energy and Industry of the State of North Rhine-Westphalia, announced the winner of the award at the Forum d'Avignon Ruhr in the GOP Variety Theatre. The winners were: RLF / Richtiges Leben im Falschen (Berlin), Conexiones Improbables (Bilbao), the Unperfekthaus (Essen) and Urbanauts (Vienna). The NICE Award 2014 was funded with overall 10,000 Euro by the Ministry of Family, Children, Youth, Culture and Sports of the State of North Rhine-Westphalia and the Cities of Bochum, Dortmund, Essen and Gelsenkirchen.

The NICE Award is now an integral part of NICE, and it is the first of several tools and services with which NICE wants to foster innovation of culture and creativity as resources for economic growth and political development.

In 2015 the NICE Award continued to grow: on the topic "Save the world-major challenges" 213 projects from 29 countries were submitted.